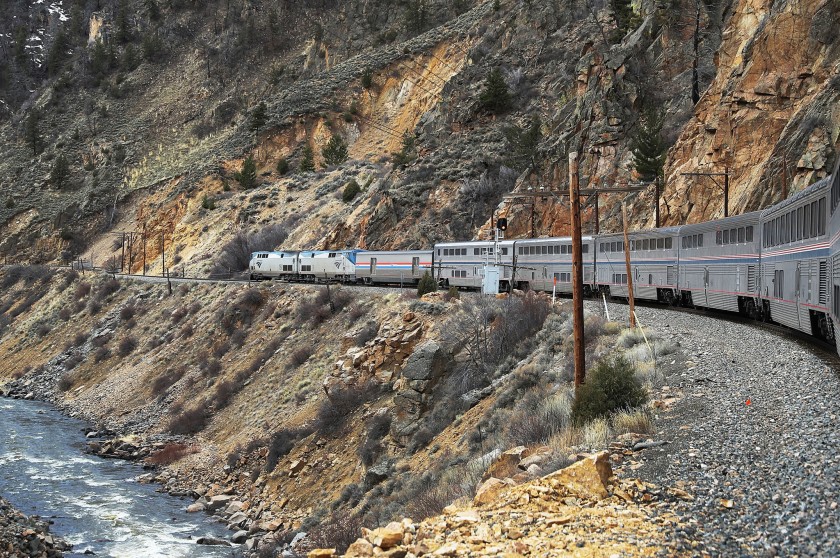 A coast to coast train trip from New York to San Francisco is quite popular among the adventurers who want to explore the pleasurable, relaxed, and scenic 3,000-mile route by train. On a train trip to San Francisco, you will be treated to the sight of shimmering lakes, majestic mountains, green fields as far as the eye can see, bustling cities, and sleepy towns—all the best parts of the great American landscape. Train Routes – New York to San Francisco There isn’t one single train route that goes straight to San Francisco from New York. Instead, it usually involves boarding an Amtrak train from Penn Station in New York—ones that ply the Cardinal or Lake Shore Limited routes, for example—then riding between 19 to 28 hours to Chicago’s Union Station. From Chicago, it’s a 52-hour ride to Emeryville, California, where a connecting bus will take you to San Francisco. The routes pass through several cities and towns that are home to some of the country’s historic and cultural attractions. Most travelers choose to make stops at Chicago, Washington DC, or Denver to explore the amazing attractions, sights and sounds, and things to do that these places have to offer. If you also intend to take a single or multi-stop journey from NYC to San Francisco then it is best to book separate tickets. Travegeo recommends at least a day-tour to explore each of these cities. While an overnight stay is recommended, do check the availability of the trains for onward journey to San Francisco the next day. Also, do not forget to book the accommodation in advance if you plan to stay overnight. New York to Chicago on Lake Shore Limited On this route, you will leave the Big Apple in the early afternoon and arrive in Chicago the next morning. Aptly named, it travels near the Great Lakes and Finger Lakes as well as the iconic Erie Canal’s locks. The mountains, orchards, and fields of the Berkshires and the shores of Lake Michigan are also some of the other sights you’ll be seeing outside the window. Two of the major stops on this daily route include:

New York to Chicago: Cardinal Route This popular route runs three times a week, with trains departing from New York Penn Station early in the mornings of Sundays, Wednesdays, and Fridays, and reaches Chicago just over 28 hours later. Like the Lake Shore route, it offers a front-row seat to some of the most beautiful sights in the eastern United States. But instead of traveling near the Great Lakes, it glides along the Ohio River. The route also winds through the impressive New River Gorge, which has been called the Grand Canyon of the East. Some of the other highlights of this scenic route include the fertile Shenandoah Valley between Blue Ridge and Allegheny mountains, the historic Potomac River, tiny farming towns, and major cities. Again, remember that the Cardinal route doesn’t run every day, just three days a week. So it would be a good idea to arrange lodging for two or three nights if you plan on getting off the train at one of its stops. Here are two of the Cardinal route’s many intermediate stops:

Chicago Chicago’s Union Station is where the first leg of the New York–San Francisco journey ends and the second begins. When you arrive in the morning, you’ll have a few hours to fill before boarding the train bound for Emeryville in California. You can spend that time exploring the massive Beaux-Arts building, which has been used as a filming location in several movies. Chicago has a lot of things to do and places to see. If you plan to stay overnight or take a day tour of the Windy City then Travegeo trip planner is an easy tool to map the key attractions that you would like to cover and make the best of your time in the city. You could also spend your layover visiting nearby attractions. Take in a spectacular view of the city from The Ledge at Skydeck Chicago. Perched on the 103rd floor of Willis Tower, it offers unparalleled views spanning up to 50 miles and four states. If you’re an art enthusiast, you might want to head to the Art Institute of Chicago. Dating from 1879, it’s one of the country’s oldest art museums. And before heading back to the station, take some time to try the Windy City’s famous deep-dish pizza. There are quite a few great pizzerias close to Union Station.

Chicago to California on California Zephyr Route More than 51 hours of spectacular, ever-changing scenery are what you can expect on this leg of the journey. As the train heads west through Illinois, Iowa, Nebraska, Colorado, Utah, Nevada, and California, you’ll enjoy unobstructed views of the landscape. The daily route passes by wonders like the magnificent Rocky Mountains and the snow-capped Sierra Madres, beside roaring rivers, deep canyons, inscrutable deserts, and vibrant cities. It’s no wonder many seasoned travelers judge it to be the most beautiful train route in North America! The California Zephyr has several major stops, Denver, CO and Reno, NV being the most famous ones. Use Travegeo’s trip planner to explore these cities and plan your city tour ahead of your travel.

Riding the Train in Comfort and Style Getting from New York to San Francisco by rail takes around three days on Amtrak’s long-distance routes. Sure, booking a reclining seat in coach is the least expensive way to make the journey. However, choosing a roomette or bedroom in a sleeper car brings not only the benefit of beds on which you can stretch out and sleep comfortably but also a host of other comforts that are worth the extra cost. For one thing, you’ll enjoy more privacy since these accommodations have doors and their own private toilet and sink. Bedrooms meanwhile, usually also include a small shower. And if you’re traveling as part of a large group, you can opt for a bedroom suite, which sleeps up to six people, or a family bedroom, which can accommodate up to two adults and two children. For another thing, you’ll enjoy free meals when you book sleeping accommodations. Some Amtrak routes provide traditional table service in the dining car, where you can mingle with other passengers and enjoy your meal while the world outside whizzes past. Other long-distance Amtrak train routes offer the flexible dining option. In this case, you’ll get your meals delivered to your roomette or bedroom or dine in a private lounge car that’s only accessible to sleeper car passengers.

The Pleasure of Traveling by Train There’s no doubt that the Space Age has made coast-to-coast travel more convenient and faster. Yet there’s something to be said for taking the scenic route. Crossing the country by rail gives passengers a deeper appreciation of the sheer size and natural beauty of the USA. In addition, it offers wonderful opportunities to get to know other people from different walks of life and to hear their stories. Mystery novelist Agatha Christie probably said it best: “To travel by train is to see nature and human beings, towns and churches, and rivers, in fact, to see life.”
0Likes
Show Comments ( 2 )